The body is composed of between 60 and 70 percent fluid. It is important to keep fluids flowing cleanly throughout the body and preventing fluids from stagnating. This role is carried on by the lymphatic system.

Lymphatic congestion is at the base of many common health problems. If toxins are not eliminated from the cells effectively, numerous diseases affecting the immune system will develop.

Keeping the lymphatic system flowing freely is one of the essential steps to maintaining good health. 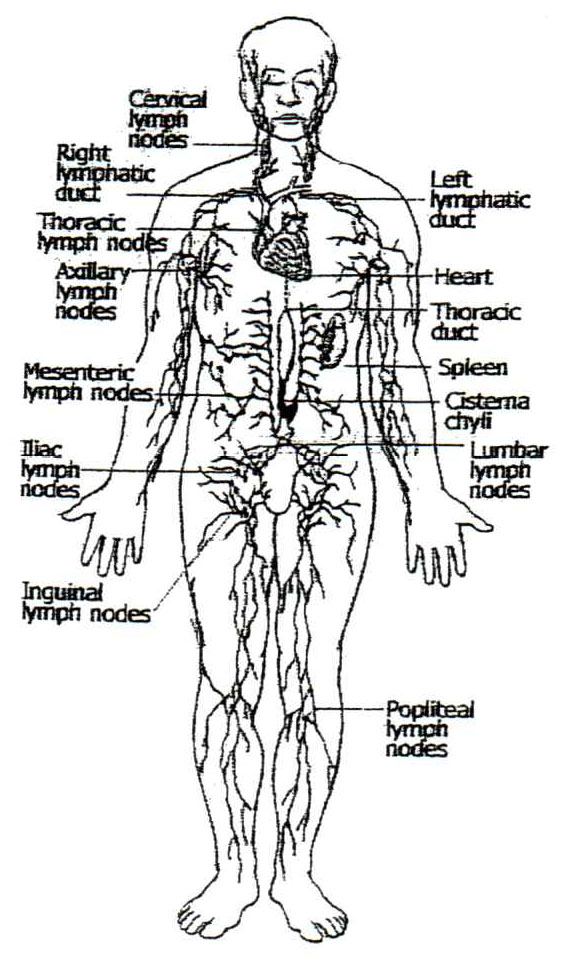 The lymphatic system is a complicated network of vessels, ducts, and nodes that moves fluid between the cells and tissues, and produces and distributes the infection fighting and scavenging cells of the body. It feeds literally every tissue and organ. Though less well known than the blood circulation, it is truly another circulatory system that complements and feeds the blood. It is the TRANSPORTATION highway for the immune and repair functions of the body! When functioning properly it effectively cleanses the tissues, aids in cellular repair, and eliminates toxins. We call it “the information highway” of the immune system, creating vitality, beauty, and preventing illness.

As a circulatory system, optimal flow must be maintained with the lymphatic system. Unlike the blood, whose circulation is driven by the pumping of the heart, the lymph does not have its own pump. It is propelled by three means: the movement of muscles, the nerves which create subtle pulsations, and the fluid pressure within the system. Lymph fluid is cleansed by the liver, kidneys, and heart. It eliminates its toxic load through the elimination channels of the body – urine, bowel, skin, and lungs.

If conditions lead to sluggish lymph flow, fluid can concentrate in specific areas (edema), or impaired function along the entire lymph system can result (congestion). When this state of congestion is long-lasting, blockages can form and cause a backup in the flow of lymphatic fluid. Consequently, toxic cellular waste cannot effectively be released from the body as a whole or from specific areas such as injury sites. Thus, the immune system may not function at its optimum. Other consequences of congestion are weight gain, diminished appearance and premature aging, such as skin breakouts, facial edema, dark circles, dry, wrinkled or sallow looking skin, spider veins, and cellulite.

When visiting Van Engen Chiropractic and Health Center for the first time, please print and fill out the New Patient Intake Form, and bring it to your first appointment. Otherwise you can fill it out in the office. (arrive 15 minutes early to fill out the paperwork)