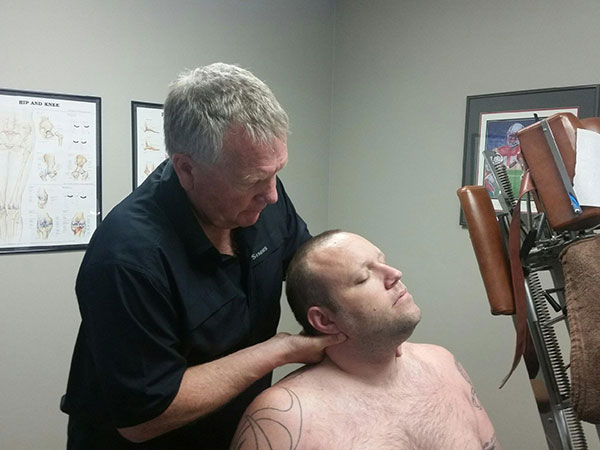 Why isn’t my shoulder getting better? The doctor says it is bursitis and tendonitis, but cortisone shots do not take away the pain.

That was the situation with Merv in 1980. He went to a chiropractor, David Katz, who was an acquaintance and very successful in caring for people.

He explained what was wrong and how chiropractic treatment would benefit him. When he came back to see him in his office and his shoulder was no longer painful, he discussed how pleased he was and expressed a desire to help people with similar problems. Dave had a waiting room full of patients but took time to talk with him and ended by telling Merv he should become a chiropractor.

It was as if God himself told him this because he had been searching for a profession that would use his talents and interests. He knew without a doubt that his was God’s plan for him.

He came home and told me and I also knew immediately without any reservation that this was God’s vision for us.

We prayed and made a plan. He had to get additional prerequisites to attend Palmer College of Chiropractic by the spring of 1982.

We had two daughters ages 7 and 4 and were leaving Adams, NE after charging gas and groceries for 6 months with the promise that when we sold our home we would pay them.

Both of us were confident that this was exactly what we were to do. We left Adams in March of 1982. The house had not yet sold. All our belongings were in a horse trailer and our vehicles that we trusted God to get us there. Our family accompanied us.

I’m not sure what they were thinking, Some folks thought we were crazy and other were just going to wait and see if we failed. When we sold the house 3 months later and paid our debts we had less than $100 left for ourselves.

Merv’s study and work area was a card table and a single light bulb on a swag lamp above the table in a corner of our bedroom. Merv remembers the girls didn’t complain, or say much while sitting on his lap. They didn’t bother him when he was studying. The girls knew the plan and that we were following it.

We didn’t know that day of graduation where we would go next. A clinic doctor at the college using the Gonstead technique received a call from Dr Tom Sherman in Cedar Rapids, IA asking for a new graduate to associate with him.

We each put on our only suit of clothes and got into our 1977 Oldsmobile to drive 90 min to Cedar Rapids. We asked the Lord to reveal to both of us if this was where He intended for us to be.

We had just commented that we felt “no sweat “ in going for this interview because Cedar Rapids didn’t sound very exciting. God had a sense of humor. It was pouring down sheets of rain when the heater in the car came on at its highest setting and we could not get it to shut off.

We started sweating and so as not to smell badly we opened the windows in the rain.

This was the beginning of 3.5 years in which we grew, learned, and enjoyed the people we considered to be our new family and trusted the Lord and his vision for us.

Our vision included owning at least part of a clinic. God closed the doors to being a part of the Cedar Rapids Clinic and Merv was led to come home to Lincoln. I, on the other hand, rebelled against the plan that God was revealing, but He taught me that His plan is the best one.

He gave me some promises I wrote down and He, in His love and mercy, fulfilled all of them.

We set up a practice at 7501 O St and stayed there until we built a clinic building after a couple of years at 7435 O ST. We rented out half of it.

Merv’s goal and vision continued to be: Serving and glorifying the Lord by:

In 2005, Sara, our daughter quit her job as a middle school teacher and came to the clinic as a receptionist/scheduler/biller. (We only had one position).

Then one of our patients who was a close friend, was diagnosed with breast cancer. Merv researched alternative and/or supportive approaches to helping her.

He found a conference in Florida taught solely by MD”s and Researchers regarding the care of people using Bioenergy and Supplementation and Nutrition. Sara and Merv attended the conference after much coaxing by one of the MD’s there.

They were overwhelmed with information, but both Sara and Merv again knew without any doubt that this type of care was a part of God’s plan for our clinic. We could do more and serve our patients in a way that God would reveal to us.

Sara went on a mission to become a naturopathic physician. She took online courses and her clinical experience with a naturopath in Arizona and a Chiropractic Naturopath in British Columbia. She started in one room with one machine to deliver detoxing frequencies to patients, and one machine to test patients for what areas of the body were weak and needed detoxing.

Sara and Merv were able to help a growing number of people. A few years later the other tenants moved out and Sara moved her care and we called that side of the clinic building “The Health Center”.

During the first 5 years our CPA called a special meeting to make sure we were aware of how unprofitable the Health Center business was. We assured him that when God tells you to do something you do it, and He takes responsibility for the outcome.

The number of people coming in was increased dramatically after February of 2016. We hired 3 more RNs and an assistant for Sara. We had outgrown the clinic building at 7435 O ST.

Our vision was to have a clinic with a minimum of 5000 sq. ft, surrounded by trees and nature, with ground floor access close to the existing location for the patients comfort. We looked and waited. In 2017 Hampton Enterprises showed us the 200 suite on the second floor of the 7441 O St across the parking lot. The second-floor suite had ground level access on the back of the building, with a view of trees out of every window. It was perfect!

We moved in May 2018 in to our new office with a staff of 3 chiropractors, and 13 staff members. This was more people doing more business than we ever envisioned. Waiting on the Lord and His timing has always been the key to success in our business and personal lives.

As we visualize the future we look back to see how God worked and continue to:

The Gonstead Chiropractor goes beyond what many chiropractors consider a spinal assessment by conducting a thorough analysis of your spine.

About the Gonstead Technique

The Gonstead Chiropractor goes beyond what many chiropractors consider a spinal assessment by conducting a thorough analysis of your spine.

When visiting Van Engen Chiropractic and Health Center for the first time, please print and fill out the New Patient Intake Form, and bring it to your first appointment. Otherwise you can fill it out in the office. (arrive 15 minutes early to fill out the paperwork)